Charleston, a city of vibrant history and Southern charm, is beautiful year-round. However, certain times can be better than others for a visit to this popular destination, depending on your personal preferences. Temperatures in Charleston are fairly mild, ranging from the high 40s in wintertime to the 90s in the summer. Thus, if you’re looking to enjoy the beaches of coastal South Carolina, summer is the ideal time to visit, but if you plan to do a lot of walking through historic Charleston, the other seasons may be better.

Whether you choose to visit in January or in July, there will be countless things to do. Here are the pros and cons of visiting during every season, as well as a guide to the best seasonal attractions Charleston has to offer. 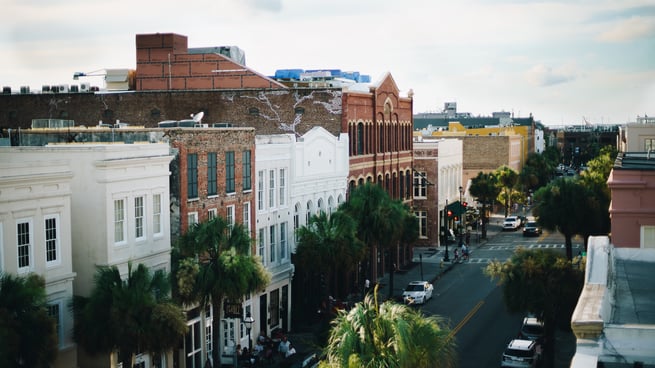 Considered Charleston’s off-season, tourist crowds are few and far between during this time. This scarcity means that hotel rates will be lower, which is ideal if you hope to visit Charleston on a budget. Flights are usually cheaper during the winter as well, though prices spike around the holidays. South Carolina’s subtropical climate means that temperatures range from the mid 40s to the high 60s during this season. It rarely snows in the city, and temperatures almost never go below freezing, so if you are looking to warm up slightly, winter may be the time for you.

The pros of visiting during the winter include fewer tourists, lower hotel rates, and a low chance of storms: hurricane season in Charleston peaks between August and October. One thing to note is that there is a mini-peak in tourism around Valentine’s Day, due to Charleston’s reputation as one of the most romantic cities in America.

Some of the best events to check out during the winter in Charleston are the Holiday Festival of Lights on James Island and the Lowcountry Oyster Festival. The James Island County Festival of Lights, which takes place from mid-November through the end of the year, features carousel rides, s’more roasting, a three-mile tour through twinkling light displays, and other festive activities. The Lowcountry Oyster Festival, the world’s largest celebration of oysters, takes place every January. Highlights of the event include live music, oyster eating and shucking contests, a huge wine selection, and a showcase of local restaurants. Yet another beloved event is the Charleston Jazz Festival, a weekend-long musical celebration that takes place in late January.

Spring marks the peak season for tourism in Charleston; the climate is perfect and the whole city bursts into bloom. Hotel rates will be highest and crowds will be busiest during this time, but if you book a room in advance and make restaurant reservations, it won’t be a big problem. Temperatures usually range from the low 60s to the mid 80s in the springtime, making it the ideal time to take a leisurely carriage ride through historic Charleston or to wander around a local plantation.

The pros of springtime in Charleston are, of course, the lovely temperatures and the gorgeous blooms that come with it, as well as the liveliness of the city. However, springtime is also the most expensive time to visit, and there will be large crowds to contend with.

Springtime events include the Charleston Food + Wine Festival, the Festival of Houses and Gardens, and Spoleto Festival USA. The Charleston Food + Wine Festival is a celebration of Charleston’s identity as a culinary hub, with food and beverage tastings, cooking demonstrations, and visits from the country’s top chefs, all held over the course of a week in March. The Festival of Houses and Gardens, which takes place in April and May, allows visitors tours of Charleston’s most beautiful private homes and gardens, accompanied by food tastings, walking tours of the city, and live musical performances. Finally, Spoleto Festival USA is a premier performing arts festival that fills Charleston’s historic performance spaces with opera, theater, dance, and music, during 17 days in May and June.

Summertime in Charleston can be humid and scorchingly hot, but there are still plenty of activities, especially for families. Average temperatures range from the 80s to the 90s, but nearby beaches make great respites from the heat. The city can still be fairly crowded, especially around the 4th of July, but hotel rates will be lower than they are in the springtime. However, August is the city’s rainiest month, so if you’re hoping for lots of outdoor time, aim for June or July instead.

If you hope to spend lots of time at the beach, summer is your best option. The other pros of the summertime include slightly fewer crowds and cheaper hotel rates, but the cons are the soaring temperatures and the likelihood for rain.

If you’re spending part of your summer in Charleston, be sure to visit nearby Folly Beach or Sullivan’s Island, which are both popular coastal retreats. If you’re visiting on the 4th of July, there is an incredible fireworks display at Patriots Point Naval & Maritime Museum, which can be watched aboard the aircraft carrier USS Yorktown, or from nearby fields. Spoleto Festival USA continues into June, and Freshfields Village hosts the Starlight Cinema Series throughout the summer, which consists of free film showings on Kiawah Island. Finally, visit a farmer’s market or take a boat tour through Charleston Harbor—there’s no better way to spend the summer than out on the water, soaking in the sights of Charleston.

Fall is yet another peak season for Charleston tourism, though it is slightly less popular than the spring, given that peak hurricane season is right around this time. Although temperatures in the early fall can still be in the 80s, most days are within the comfortable high 60s to 70s range, all the way through November. Fall is the ideal time to do many of the activities listed in our guide to the 15 Absolute Best Things to Do in Charleston, such as exploring Fort Sumter, strolling down Rainbow Row, and visiting Charles Towne Landing.

Given the popularity of the fall season in Charleston, hotel rates will be relatively high, though not as bad as those in the springtime. However, the pros of visiting during the fall outweigh the cons: the temperature is perfect, there are fewer crowds, and all of Charleston is overlaid with a certain autumn charm.

Events to explore in the fall include the Boone Hall Pumpkin Patch, Charleston Restaurant Week, the Preservation Society of Charleston’s Fall Tours, and the MOJA Arts Festival. The Boone Hall Pumpkin Patch is home to a series of autumn activities at the Boone Hall plantation throughout October, from a petting zoo to a corn maze. Charleston Restaurant Week, which takes place in September, is one of the city’s most celebrated culinary events, in which restaurants across the city show off Charleston’s cuisine. The Preservation Society of Charleston also holds self-guided Fall Tours, which open some of the city’s most exquisite and historically significant homes to the public. Finally, the MOJA Arts Festival, held in September and October, celebrates African-American and Caribbean culture through many art disciplines.

Enjoy beautiful beaches in the summer, majestic historical monuments in the fall, lush plantation gardens in the spring, or holiday lights in the winter. No matter the season, Charleston will be alive with culture, history, and culinary delights.