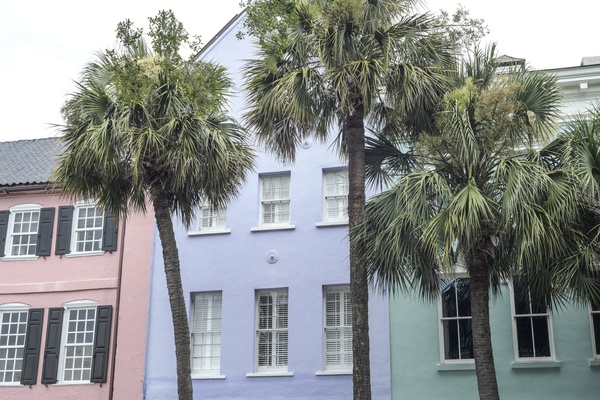 The thirteen brightly-colored homes of Rainbow Row are each host to fascinating histories. Learn more about this unique destination here.

Arguably the most iconic street in Charleston, Rainbow Row is a series of thirteen pastel homes, each with a rich and unique history of their own. The houses, all located on East Bay Street, were coined Rainbow Row after they were restored in the 1930s and 40s. Rainbow Row is one of Charleston’s absolute must-sees, for its captivating beauty and engaging history.

Originally built directly on the banks of Cooper River, the land across from what is now Rainbow Row was later filled in. The buildings were initially commercial stores on the ground level and living quarters above, but they were mostly left to ruin after the Civil War. In the 1920s, the founder of the Preservation Society of Charleston, Susan Pringle Frost, bought six of the buildings, but she did not have the money to restore them. In 1931, a woman named Dorothy Haskell Porcher Legge bought a neighboring section of the houses and began to paint them in a colonial Caribbean color scheme. Others began buying houses and painting them similarly, creating the colorful, eponymous effect.

Every house in Rainbow Row is unique, architecturally and historically. 91 East Bay Street, once owned by playwright John McGowan, was restored with large arched doors. 95 East Bay Street, formerly the house of Founding Father Charles Cotesworth Pinckney, has a Flemish gable roofline. Another house, 105 East Bay Street, is the only one that has retained a Victorian storefront. Interestingly, 83 East Bay Street was built by a Tory merchant who later fled Charleston during the Revolutionary War. Most of the houses have had their current appearance since about 1945, when restorations were generally completed. There are Charleston city ordinances in effect making sure that the houses on Rainbow Row remain brightly colored.

Rainbow Row is subject to a host of urban myths relating to its bright colors. Some say that the houses were painted such colors so that drunken sailors could make their way home. Others believe that the colors date back to the time when the buildings were used for commercial purposes; the colors are supposed to correspond with what was sold inside. However, most historical accounts have established that these stories are false, though it is amusing to imagine them.

Rainbow Row, like much of historic Charleston, has borne witness to some of the nation’s most important events. Its bright colors and unique architecture correspond to fascinating stories and quirky myths. One of the city’s most iconic, picturesque views, it is definitely worth the visit.